“So long as the millions live in hunger and ignorance, I hold every person a traitor who, having been educated at their expense, pays not the least heed to them!”
-         Swami Vivekananda 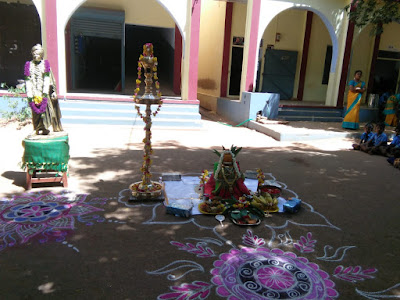 Swami Vivekananda Mahasamadhi Day is being celebrated on 4th July. In addition  to that we celebrated Annapooja in our school Premises on this day. Rice was collected from our students, and altogether it was heaped up and over this Annapoorani Statue was adorned. 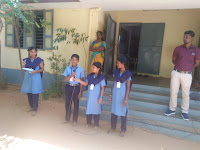 The  function started with the prayer song by our students,  following that Annapoorani slogan was recited by our music teacher Mrs. Lalitha Parameshwari . 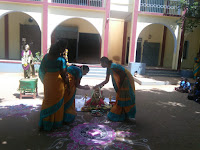 We had a conversation about Annapooja  and Vivekananda in Tamil as well as in English, which explained the importance of celebrating the function this particular date. We also had an orations speech by our student M. Kiruthick Roshan and S.Anushiya in Tamil and English about the significance of Annapooja. 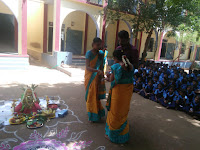 Our Principal Mrs.Maheshwari gave a speech an importance of Anna Pooja. Atlast we concluded the program by taking Arathi to the Annapoorani and followed by Kendra Prayer. Our Correspondent Shri.S.K.Subramanianji arranged the function in a grand manner.
at 10:00