“Service to humanity is service to God”. 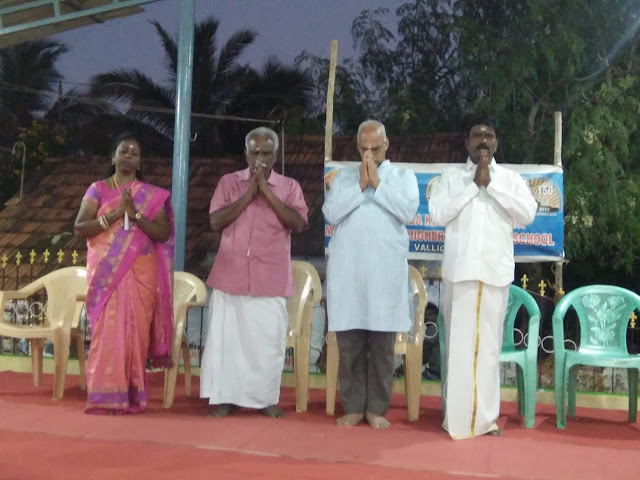 After Swami Vivekananda’s Chicago religious meeting all western countries felt very proud about our nation. To spread swamiji’s preachings we have conducted the samartha Bharatha Parva every year. Through this programme we stimulate the public to do the social service to our nation. 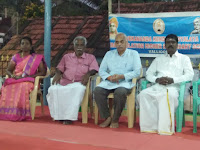 This year we have selected the rural area kalanthapanai near vallioor . Our correspondent, Principal, 50 students who were given well practice and 15 teachers participated in this programme. The programme was started with prayer song at 7.30 p.m. One of our teacher Sasirekha welcomed the gathering. 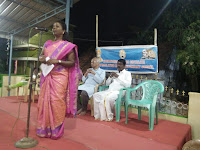 Introduction of the program was given by our Principal  Mrs.Maheshwari. Our chief guest Mann.Banudasji, General secretary of Vivekananda Kendra, Kanyakumari, spoke about preachings of swami Vivekananda, how he  dedicated his life to our nation and few great personalities  who also sacrificed their life for   our nation.

Every one should work whole heartedly and devote their time for the upliftment of the society and encourage the people to work positively to spread the message of oneness and should be very strong and courageous even if they face the difficulties in their life they should over come the difficulty by accepting it as a challenge  towards their success. 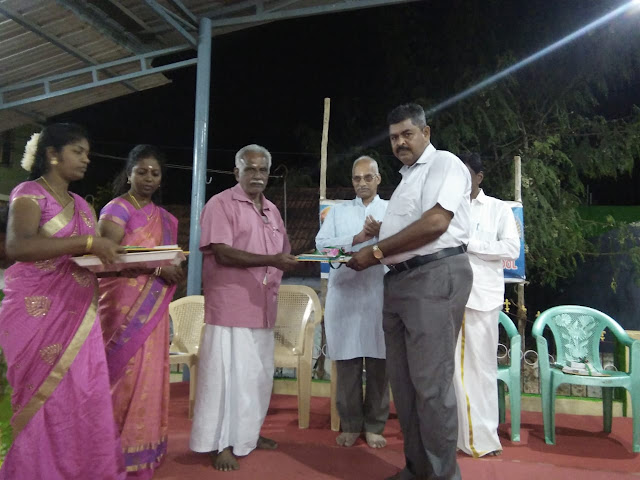 “All work and no play makes jack a dull boy says the proverb.  A pupil without  spirit of sports is not an ideal one”. 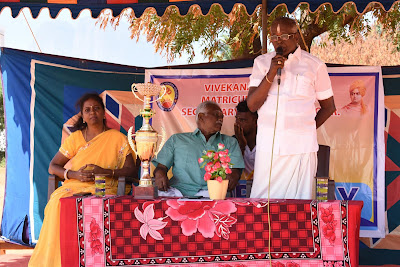 Our school curriculum  has been designed in such a way that imparting physical education is made past and parcel of childs all round development. With this aim in mind, our school conducts sports day every year  in the month of January.
“Champions keep playing until they get it right”.

According to this sports day was celebrated on 25th  January 2020 Sri.Dharmar proprietor of Selvi Jewellers , Vice president  of Dr.Sivanthi Athithanar Sangam, & President of Thriuchendur Ayya Vaikunda Avatharapathi was hoisted our Olympic flag and national flag. Olympic jothi was ignited by   all the dignitaries.

On this fine occasion, he explained the importance of sports in his speech and how we get the physical and mental growth with the help of sports event. He distributed cash prize for the state and  national  level sports achievers. The Pigeon   (Symbol of peace) was flew away  by our honorable guest. Its indicate the opening of the sports meet.

The students were divided into four houses  (Red, Blue, Green and White) and categorized according to their ages. Many events were conducted for the  students (shot put, disc throw, long jump, Relay, 100mts,200mts, 400mts, 600mts, 1500mts, 3000 mts running race etc…) The four group incharge teachers gave enough idea and practice to their students. 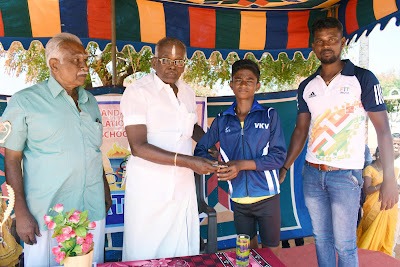 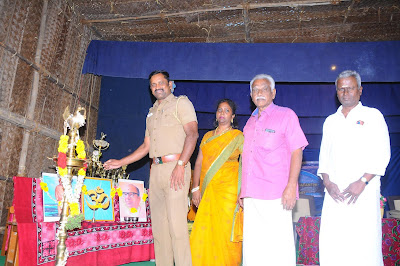 We celebrated the 157th Janma Diwas of Swami Vivekananda, 30th Annual Day of Vivekananda Kendra Vidyalaya vallioor and National Youth Day on 11.1.2020 in a grand manner. The programme began  at 4.30 pm.

It was compered  in two language Tamil and English by our teachers. It is our 50th year of Rock Memorial  to highlight  this our teacher also said the quotes of swami Vivekananda in between the cultural programme.
On this occasion the programme was inaugurated by our honourable chief guest Mr.Tirupathi, Inspector of Police by lighting the lamp.

The celebration was initiated with an invocation song sung by the students of Vivekananda Kendra Vidyalaya vallioor. Welcome address by our teacher K.Rajasri followed by Annual report by our Principal Mrs. N.Maheshwari.

The academic toppers as well as extra curricular activity toppers were honoured by giving prizes. The prizes were given by the chief guest, guest of honour, correspondent and principal. One of our teacher Mrs. Sowmiya read out the name of the winners.

Chief guest Mr.Tirupathi addressed the audience. He also praised and appreciated the students who received the prizes in various curricular and co curricular activities.
Mann. Ayyapanji, RDP Secretary, Kanniyakumari gave an eloquent speech on Swami Vivekananda  and also advised the parents to educate their  children.

Correspondent S.K.Subramanian  and guest of honour Mann.Ayyapanji, RDP Secretary, Kanniyakumari presented the memento to the chief guest.
Vote  of thanks was proposed by our teacher Mrs.Chandra Selvi.