REPORT ABOUT THE PRAYER MEETING CONDUCTED BY GOD INDIA TRUST FOR THE STUDENTS THOSE WHO ARE GOING TO WRITE THEIR PUBLIC EXAM.

A spiritual trust named ‘God India’ was conducting special prayer meeting for the 10th, 11th & 12th students all over Tamilnadu. On account of this one of the trustee Mr. Muraliji came ones to our institution on 27/11/2019 Wednesday. They arranged at 11.30am and the students were seated in the prayer hall. Mr. Suresh, in charge of God India trust, Vallioor accompanied with him.

The program started with prayer song and following that one of our teacher Mrs. Essakkiammal gave an introduction about Mr.Muraliji and welcomed him on behalf of our institution. Mr. Muraliji started his inspirational speech, he Quoted the points such as ‘Importance of Education in the competitive world”, “Respect the elders etc. He said that the mother is the first god, next to her father takes the second place and after that the teachers, who is considered as the ‘Second part’ and he Quoted that the God is next to those three, so he asked to give respect to those three first and he advised to wake up early in the morning and chant the mantra. 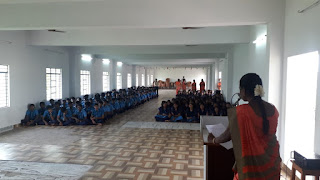 This mantra would bring you a positive vibration among your mind which kindles you to learn better. At last he concluded by writing all the students to score high marks in the board examination. All together closed their eyes and did the silent play for a minute.
Mr. Muraliji provided the mantra stickers to be pasted in their houses along with the Kunguma Prasadham. Thus the students got an inspirational and motivated though from the delicates. They  winded up the session around 12.30pm. our correspondent and principal thanked the trust members for their motivational speech among the students.